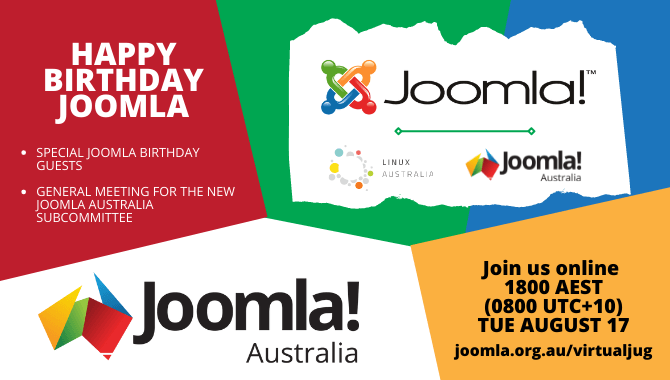 Join us on Tuesday August 17 for the first event celebrating Joomla's 16th birthday!

Joomla! Australia's virtual user group is now going to be the first event in a series on August 17 celebrating Joomla's 16th birthday! We'll have some special visitors joining us from around the world, and you can also join other events throughout the day including Joomla User Group London (very early in the morning our local time) and Joomla User Group Chicago North during the day on Wednesday AEST.

The New Direction for Joomla Australia

Joomla Australia are becoming a subcommittee of Linux Australia. Join us on August 17 to find out more and have your say in the direction being taken.

Over the past few years, Joomla Australia volunteers have been working behind the scenes on working towards the direction Joomla Australia should take. With a new .org.au domain name requirement being introduced at the start of the year, the pace changed.

Joomla Australia is now becoming a formal subcomittee of Linux Australia. Amongst the features the new structure provides, it gives the subcommittee access to bank accounts, insurance, seed funding for events and access to grants through Linux Australia's operations.

Along side the presentation will be a short introduction to participating in Pizza Bugs and Fun coming up later in the year.

Patrick's been using Joomla since it was Mambo, and helped with starting the Melbourne Joomla User Group back in 2008. A Certified Joomla Administrator, he's currently increasing his involvement at the Joomla! Project level through the Joomla Community Magazine and Bugs & Fun at Home programs. He runs KPS, a Melbourne based consultancy focusing on Joomla implementation, hosting, maintenance and support.