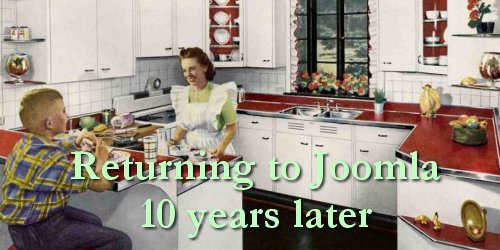 For those who go back with Joomla a decade ago, are old Joomla extensions, modules, components, plugins or even templates still compatible with the current version?  I know already, from trial and error, I haven't seen any templates that are which is a shame. I have a lot of them I paid for from various developers.  The same goes for many premium extensions I have, so I was curious if it is an issue where it just depends on the extension or if it is a flat out "no", none of these is compatible with today's Joomla? a forum user, Joomla Forum, 17-Aug-2018

By way of introduction, yesterday I was talking with my mother about the dangers of keeping her old kitchen mixer that she refuses to part with that she's had for the past 40 years and she said, They don't make things like that anymore. To which I replied, Thank goodness they don't!

The platform underpinning Joomla! has changed a lot in 10 years. 10 years ago, when J! 1.0 was still being used, many webhosting providers were dealing with people requiring more advanced features relating to website hosting. For example, J! 1.0 relied on PHP 4. J! 1.5 started using best-practice (at the time) MVC development but still lacked established access controls; J! 1.5 was the first version built with PHP 5. It is a historical footnote that, in order to ease the transition from J! 1.0 to J! 1.5, the developers offered a legacy mode feature that, in effect lobotomised many of the J! 1.5 improvements for limited-time backward compatibility. J! 1.6 that morphed into J! 1.7 and finally J! 2.5 implemented industry-standard ACLs while, at the same time, retiring most of the old J! 1.x codebase and data structures. In the same manner as J! 1.5 was incompatible with J! 1.0, and J! 2.5 was incompatible with J! 1.5 because of the ways that PHP was being used together with the structural changes accompanying these series, J! 3.x went further.

Except for that one-time hiccup, when a legacy mode kludge was offered (which, by the way, didn't always work), no new major release of Joomla! has offered something similar.

These are not the only changes that have occurred in the past 10 years. Some of the changes have been propelled by changes in the way that people prefer to obtain internet content. 10 years ago, smart mobile devices were not commonplace; the first generation iPhone was released mid-2007, for example. These evolutionary changes in technology have also accompanied the need to deliver web-based content to a broader audience, e.g. changes in media content, the separation of content from presentation (i.e. CSS from HTML), and the like. Add to this technology soup Twitter (and Bootstrap) and the world is a very different place from where it was 10 years ago.

The world is constantly changing; Joomla! is changing with it. The next generation of Joomla! (Joomla! 4) will operate only on PHP 7.

10 years is a long time when we're discussing website longevity. A study I read some time ago put the average life-span of a website at around 2.66 years (I was surprised that it was a long as that!). Over the past 10 years (and going back further to the time when the Internet was in its infancy), there have been changes in web browser technology. Some web browsers don't even exist any more: for example, 10 years ago people were using Netscape Navigator and Internet Explorer 4. Along come game-changers such as CSS 3, XHTML, WCAG and suddenly everyone's playing catch-up. Further, keeping pace with the newer entrants on the web browser scene products such as Mozilla Firefox and Google Chrome Joomla and extension developers also had to accommodate the ways that different browser implemented W3C standards; strategic changes involved moving from Mootools (pre-J! 3) to jQuery Javascript.

Therefore, in a general sense, no, they don't build things like they used to. The software that people may have used over the last 10 years has changed. Extensions designed for older major series of Joomla! are generally incompatible with new major series of Joomla! and vice versa. There have been four major series releases: J! 1.0, J! 1.5, J! 1.6/1.7/2.5 and J! 3 (the odd naming was merely an unfortunate marketing decision at the time). The fifth/future major release will be known as J! 4.

It's also fairly straightforward to overhaul your old website(s) using the latest version of Joomla. Depending on what you want to do and whether your ideas about website construction need to be revised, building a new website (using the latest, best-practice methods) may not be all that complicated. It's really only a question of how much time and, perhaps how much money, you're prepared to put into this process. Again, depending on what you want to do, it may take a few hours or a couple of weeks to make that transition.

A website is a little like a kitchen appliance:  it's designed to help you do a job not the other way around (you don't redesign the job around the appliance); it may have separately-purchased attachments to perform other jobs; the appliance will eventually wear out and all those attachments will be useless; newer, better appliances are always coming on the market; and you can spend more time fixing broken appliances than actually using them.

I understand when people say that they've paid money for some of the extensions they've used with Joomla over the years; I don't know anything about other people's and I don't know whether they've recovered their financial outlays.  I would, however, suggest that we try to keep these matters in perspective.  The financial costs in purchasing Joomla extensions probably pales into insignificance compared to the other investments that people have made in technology.  I must have spent tens of thousands of dollars in the past 30+ years on PC hardware, different versions of MS Windows and related products (not to mention many smart devices and so forth) but nothing lasts forever.  In conclusion, it's probably a good thing that they don't build things like they used to.